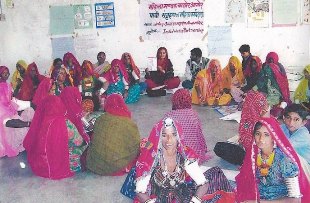 Rajasthan is probably the most disaster sensitive state of India. Owing to large area and arid climate Rajasthan is facing disasters for several decades. During the last 20 years, drought, flood, twister, earthquake and other disasters have affected over 10 million people physically, economically and socially. Human labour of many years and assets have been damaged through disasters and raised the need of rehabilitation and reconstruction.

Drought has affected the State for a long time. During the last 51 years, as many as 44 years have been years of drought. Drought is not dramatic like other disasters: It is a slow disaster and affects large number of people for long time. For a common man it is a long fight against disasters and he needs outside support critically.

Livelihood options in Western Rajasthan are severely limited and despite recurrent drought majority of people in rural areas are dependent on agriculture and animal husbandry. Drought irrepairably damages this major source of occupation; crops wilt and livestock die every year. Due to these circumstances, most of the males migrate for seven to eight months to big cities to earn livelihood.

MMBA is working on water conservation and disaster management since 1990 through various activities:

Water storage structures (tankas and tanklis) have been constructed and repaired for providing employment and steady solution of drinking water to poor community, who have no resources of water nearby and cannot bear the construction cost on their own. The beneficiaries were selected through common consent of villagers during the village meetings.

Due to continuous drought in the area and effect over major occupation, MMBA Science and Research Centre conducted a sample survey in 18 blocks of four districts and analysed the status and effect of drought. On the basis of analysis efforts are underway to create awareness among the villagers and to chalk out a strategy for eradication of drought. With the help of the organisation, the villagers submitted various proposals to the district administration. The organisation highlighted the issue with the help of media.

With the consent of the Gram Sabhas, MMBA formed the Drought Struggle Committees for better implementation of disaster management activities and government schemes. In each committee women participation is compulsory. All the committees have been imparted training. They hold monthly meetings and through these meetings the members are briefed about the responsibilities, drafting the work plan of village development, strengthening of panchayats, information regarding government schemes, etc.