Area We Work In 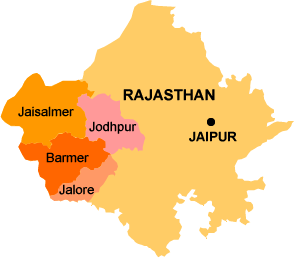 Rajasthan is the largest state in India covering an area of 34.22 million hectares, which is 10.5 per cent of the country's geographical area, but sharing only 1.15 per cent of its water resources. The state is predominantly agrarian as the livelihood of 70 percent of its people depends on agriculture based activities. Nearly 60 to 75 per cent of the state is arid or semi-arid. In the last 50 years, a threefold increase in the human population and doubling of the livestock population has put tremendous pressure on the fragile water and land resources of Rajasthan. Recurring and prolonged droughts, particularly in the western arid part of the state, is a common phenomenon exacerbating water shortages. The estimated annual, per capita water availability in the state during 2001 was 840 cubic metres, against the national average of 1,140 cubic metres. Groundwater is overexploited in many districts of the state to an extent of 439 cubic metres.

Rajasthan has about 50 million hectares of rocky terrain. Over the existing storage, it offers the possibility of harvesting and conserving 90-145 million cubic meters (MCM) of runoff annually by developing suitable rainwater harvesting structures. Many additional sites have been identified for traditional water harvesting systems throughout the state and, when developed, they can satisfy the water requirements of large populations.

A case study in Jodhpur district has shown that with the existing and proposed rainwater harvesting structures, over 68 MCM of water will be available even during severe drought, which may suffice to meet nearly 69 per cent of the drinking water requirement of villages. Multiple existing tanks/reservoirs for storage and conservation of runoff need urgent rehabilitation. Rehabilitation could lead to additional storage that could be utilised in dry years. The state has 216 cities, which generate 522 MCM of utilisable roof runoff annually. Excluding losses, a potential of 265 MCM of runoff from roof surfaces is available from urban catchments for harvesting and conservation in underground cisterns or for recharging groundwater aquifer through bore wells, to mitigate drought. This could meet the domestic water requirements of nearly 9 million people. High flash floods, though occurring once in about 10 years, can bring as much as 22.6-54.8 billion cubic meters (BCM) of additional water in one year. This is comparable to 55.7 BCM of free underground storage, accumulated in the state during the last 20 years due to groundwater exploitation. Taming the excess flood water to rejuvenate the depleted aquifer is a major financial and technological challenge.

Surplus water of the Indira Gandhi Canal may also be utilised to recharge the depleted aquifer. In situ water conservation on vast arable lands, recharging of the soil profile, runoff harvesting and its efficient and economic utilisation through drip, sprinkler or conservation irrigation are vital for drought mitigation. It is estimated that one year's drought relief funds may be sufficient to develop rainwater harvesting structures to meet drinking water requirement in rural areas of western Rajasthan.